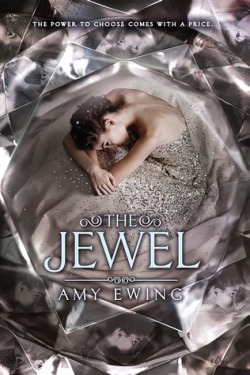 Quick Look: I had wavered on reading this series, worried that it would struggle to find a cohesive way to bring together a struggling world, a fight between classes, and a romance. In the end, it was an entertaining read but could have used a little more development of characters and relationships.The summary of The Jewel from Goodreads:

The Selection meets The Handmaid’s Tale in this darkly riveting debut filled with twists and turns, where all that glitters may not be gold.

The Jewel means wealth, the Jewel means beauty—but for Violet, the Jewel means servitude. Born and raised in the Marsh, Violet finds herself living in the Jewel as a servant at the estate of the Duchess of the Lake. Addressed only by her number—#197—Violet is quickly thrown into the royal way of life. But behind its opulent and glittering facade, the Jewel hides its cruel and brutal truth, filled with violence, manipulation, and death.

Violet must accept the ugly realities of her life . . . all while trying to stay alive. But before she can accept her fate, Violet meets a handsome boy who is also under the Duchess’s control, and a forbidden love erupts. But their illicit affair has consequences, which will cost them both more than they bargained for. And toeing the line between being calculating and rebellious, Violet must decide what, and who, she is willing to risk for her own freedom.

I was really worried starting this book. I enjoyed The Selection series, but felt that it was lacking in several areas. The one thing that finally pushed me to read The Jewel was that it seemed to pick up the main thing I found lacking in The Selection: the external conflict surrounding the characters and the world they lived in. It seemed that conflict would play an important role in the story, and it did.

There is definitely more conflict in this story, with many of the surrogates unhappy with their life and the complete lack of control over their own lives. They are essentially slaves, bought to birth a child and to show of one’s wealth, but they are nothing more than that. I thought that depiction was interesting and something I haven’t read often.

I also thought Ewing’s writing style was amazing. My issues with the book have nothing to do with her style. I loved how she added little details throughout the story, taking the time to note a detail that seems unimportant, but just gives a little more input into the world. One detail that really stands out to me is that of the Auction House, where the iron bars that block the windows are in the shape of roses. It seems like an unimportant detail to focus on, but it really demonstrates the duality of life within the Jewel. It looks beautiful and wonderful, but it has a dark, dangerous side.

I wish there had been a little more background information into this “Lone City” business. Maybe there will be more in the next books, but I was left questioning the world and how it came to be. Is it a newly created world, separate from the one we live in? Is it a somewhat post-apocalyptic future of this world? Just a little more information would have been nice.

I think my biggest issue comes from character and relationship development. The characters felt stereotypical at times. The rich drunkard who cares only for what is in his drink. The vain and catty girl who thinks herself better than everyone else. On the other end of the spectrum, there’s the character who is always a perfect gentleman, to the point of being a little dull. Or the girl whose innocence makes her seem ignorant and oblivious. I wanted more from these characters and I hold out hope they’ll develop more in the next books.

I also thought some of the relationships were just not well-developed, especially the one between Violet and Ash. It made my head spin with how quickly everything unfolded, but it didn’t feel right. It felt rushed. I did think Violet’s friendship with Annabelle, her maid, was sweet.

You can purchase The Jewel here:

2 thoughts on “The Jewel by Amy Ewing”