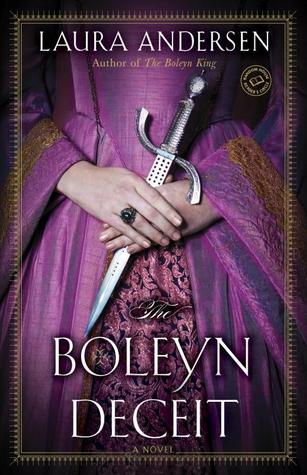 The Boleyn Deceit follows shortly after The Boleyn King. Minuette and Dominic are in love, but William has his heart set on Minuette. Elizabeth is wishing she could admit her feelings for Robert Dudley without repercussions. Minuette is still searching for the person behind the death of her friend, and is becoming the center of rumors and death threats. All the drama and intrigue of the Tudor court is there and it’s hard to believe this isn’t how history happened.

Elizabeth is the same, stubborn, strong, determined woman in this series as she is written in the history books. She is levelheaded most of the time, but both she and William have the Tudor temper to deal with at times. Dominic is calm, controlled, and rational. Minuette is innocent, but not as naive as others believe. She may not be as experienced in the darker side of court life, but that doesn’t mean she can’t play the game.

The dynamic between these four has changed from the first novel. In the beginning, the weight of responsibilities didn’t weigh so heavy on them. They were never carefree, but they were able to forget their troubles, if only for a little while, and just be friends. William looked to these three to be his support, to always tell him the truth because they are the only ones he trusts. In The Boleyn Deceit, secrets have changed their relationships and even though they say they still trust each other completely, William becoming king means that is not always true. As William adjusts to being king, his relationships become more about usefulness and that in turn changes the relationships between the close four.

The weaving of the deception and trickery is so fantastic that just when I thought everything had been revealed, Andersen adds another twist that fits to perfectly that I couldn’t believe I didn’t see it coming. There are layers of deceit and just as one knot unravels, another forms. It’s deliciously tangled and I love it.

The Boleyn Deceit is a novel just as amazing and breathtaking as any story from history. Andersen has created characters and plots that are so perfectly in tune with the period that I forget I’m reading an alternate history novel. I’m a huge history buff and while I contemplate how things would have turned out if one thing were changed in the story, I’m usually sticking with the facts. Andersen makes me wish this is how everything turned out. Her writing and story are so perfect that for once, I want to change history. The Boleyn Reckoning cannot get here soon enough.

If The Boleyn Deceit sounds like your kind of novel, you can purchase it here:
Amazon
Audible
Barnes and Noble
IndieBound

Thank you to Random House publishers and NetGalley for an advanced copy of the novel in exchange for an honest review.