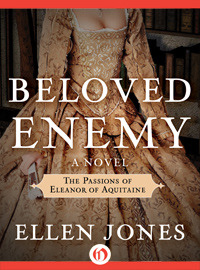 There are so many people in history I still know too little about. I know names and some dates, but there will always be more. Eleanor of Aquitaine is one of the characters of history that I know of, but haven’t really looked into. Beloved Enemy was the first book I had read that attempted to create the world and life of this extremely powerful and influential woman.

In a time when men ruled and women were made to be wives and mothers, Eleanor had power. After her father died without a male heir, she inherited the duchy of Aquitaine, becoming the most eligible woman in Europe. Placed under the care of the king of France, she is married to Prince Louis and becomes queen of France only one month later. She is trapped in a loveless, lifeless marriage where the vibrant life of her youth is stifled and looked down on. After many years of marriage, she is finally about to get herself free from Louis.

Free from the French king, she wishes she could stand alone and rule the duchy in her own right. A few circumstances prove the times won’t allow this, so she allies herself in marriage with Henry, the Duke of Normandy and Count of Anjou. In complete contrast to her first marriage, this one is filled with passion, both good and bad. Both Eleanor and Henry are strong-willed and stubborn, leading them to spend as much time in love as they do fighting. Henry wants to conquer everything he believes to be his and Eleanor is more than willing to go along, ultimately securing their fates at king and queen of England.

Before reading, I did a little digging into Eleanor. I like to know something about the people behind the characters. Eleanor had power in a time when women had none. She fought for things to be done her way, looking to see how she could better herself and the people of her land. She was smart and beautiful and knew how to use that to her advantage. All of that is in this book, but it also makes her into a woman who yearns for power and love, something that was rarely found.

Eleanor is not the only female this book centers on. Bellebelle, Henry’s mistress, is also a major character. She is largely a figure of Jones’ creation, although put together based on details from the times. She is a prostitute who captures Henry’s attention. In complete contrast to Eleanor, she is timid and quiet, fitting the role of women of the time.

The contrast between the two stories was fantastic. Eleanor is powerful and Belle has nothing. Both have the love of Henry, but they are different kinds of love. Henry loves Eleanor because she is like him: powerful, passionate, and cunning. Henry loves Belle because he does not have to be anything but himself with her. When these two women finally meet, that climactic moment shows that behind the facades, they are simply two women fighting for their own power in a men’s world.

Beloved Enemy is a very apt name for the events of this novel. It was an excellent first novel to read about Eleanor that ended up being a lot more than I expected. Each little piece Jones drops only makes me want to read more of her novels and about Eleanor. This is an excellent historical fiction novel and I will definitely be reading more.

If Beloved Enemy sounds like your kind of novel, you can purchase it here:
Amazon
Audible
Barnes and Noble