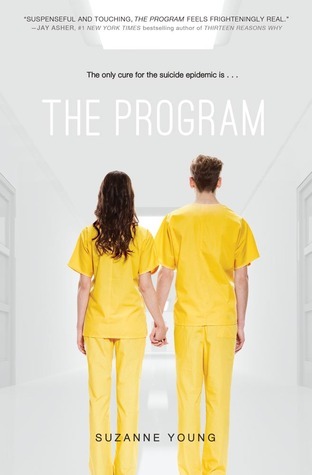 I don’t keep my depression a secret. I’ve been to the bottom and fought my way back and I’m proud of that. Something about The Program got to me though. It took a while for me to figure it out, but once I did, I only loved the book more.

Sloane lives in a world where suicide is an epidemic, something that spreads from person to person, killing as it goes. Teens aren’t supposed to show grief or be upset. Crying can get them pulled away from everything they know and put into the Program. Memories are erased, leaving teens as a shell of their former selves. For Sloane, she’s watched even closer. Her brother committed suicide, leaving her more susceptible to the same fate. James, her brother’s best friend and her boyfriend, is watched closely as well.

I adore Sloane and James. Their relationship leapt off the page and had my heart beating faster. James is the perfect mix of cocky and insecure. He clearly puts on a brave face, but lets it down when he must. Unfortunately, this also leads to his downfall.

This is the part that had me invested even more. The idea that depression is something that needs to be hidden, that putting on a brave face is better than being true. It hit extremely close to home because for years, this is what I did. I ignored everything my head was screaming at me and acted as though everything was fine. I managed to keep the act going until I finally cracked. I did this because of the stigma that accompanies depression. I didn’t want to be seen as weak. For years, all I had heard was that I was so brave and strong for dealing with my disease while keeping a smile on my face. I felt that if I admitted how draining it was and how much I hated it, or how often it made me cry, that I would be letting everyone down.

The Program is the fictional version of that stigma. It represents the idea that pushing thoughts and feelings aside, instead of dealing with them, is the cure. Granted, suicide is not an epidemic, but I can see it heading that way. I felt so completely connected to Sloane as I read. Her feelings and thoughts hit home. I could not stop reading because I had to know what came next for her. I spent the entire novel rooting for her.

I didn’t expect The Program to hit me like it did. I figured it would leave some impression, given my connection to pieces of the subject. As I read more, though, I felt myself being drawn further and further into the novel. I’m extremely glad I read this book and I’ll definitely be reading The Treatment.

If The Program sounds like your kind of novel, you can purchase it here:
Amazon
Audible
Barnes and Noble
IndieBound