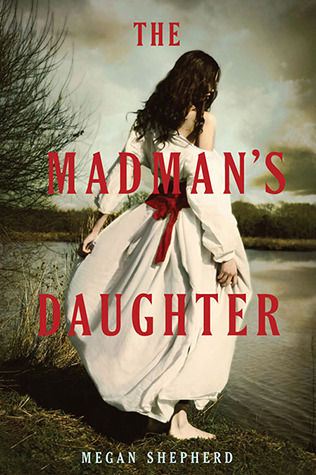 Even a day later, I’m still having trouble figuring out what to write about this book. It’s dark, twisted, and a little horrific at times. It brings up an interesting topic and works to address it. There’s a love triangle that doesn’t annoy me. This definitely isn’t a book everyone will enjoy, but I loved it.

Juliet Moreau has lived with the consequences of her father’s actions for years. He vanished in the midst of a scandal, leaving Juliet and her mother to fend for themselves. After her mother dies, Juliet goes to work as a maid. After a series of events, she travels to visit her father, living isolated on an island, accompanied by Montgomery, the son of a former servant, and Edward, a castaway. Once on the island, Juliet discovers the truth about her father’s madness and how she is connected to it.

I’m torn in my feelings about Montgomery and Edward. In Montgomery’s favor is the childhood bond he shares with Juliet. They grew up together and there’s something about childhood friends that lasts a lifetime. But he also witnessed and was a part of her father’s actions, something Juliet isn’t sure she can handle. Edward is mysterious, running away from a past he doesn’t want anyone to know. Juliet can understand that desire after seeing the madman her father has become.

I had never read H. G. Well’s The Island of Moreau, but that didn’t take anything away from the novel. It’s dark and twisted, but not overly so. Things are discussed and Juliet comes to her own conclusions, but for the most part, the evil takes place outside of the novel. We get to see the consequences instead of the actions. I figured out one of the twists and had a feeling about another, but I was so drawn in that it didn’t slow my reading at all.

The Madman’s Daughter poses interesting questions. What is it that gives someone his or her humanity? Is it simply being human? Or can it be created? Dr. Moreau is clearly a madman, conducting experiments that should never happen. Does he still hold on to his humanity because he was born a human? What about the creatures he created? They were not human to begin with, but through the doctor’s experiments, did they gain their humanity? Are they people because they have human emotions, thoughts, and morals? Or are they forever doomed to be nothing more than monsters, the product of a madman’s desires?

The Madman’s Daughter fascinated me. I couldn’t put it down from beginning to end. The content is shocking and a little grotesque, but it is still an amazing novel. I think this is definitely a must read as long as you think you can handle the twisted nature of Dr. Moreau’s work.

If you think The Madman’s Daughter sounds like your kind of novel, you can purchase it here:
Amazon
Audible
Barnes and Noble
IndieBound