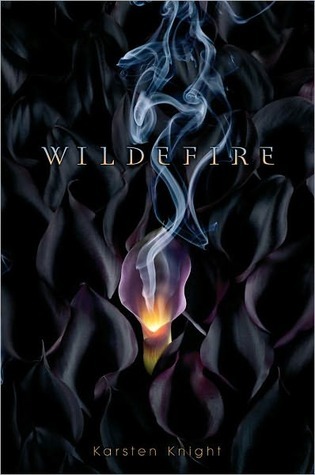 I wanted to like Wildefire, I really did. A book that includes all gods and goddesses from the world’s cultures sounds like it could be amazing. Instead, the book felt disjointed and the action didn’t really start until near the end. I’m all for a thorough set-up, but the ratio of set-up to plot was off for me. The reason I kept reading, however, were the characters Knight created. They weren’t enough to save the novel though.

The book starts in the middle of a fight between Ashline and Lizzy, a girl at her school. Ashline’s sister arrives and escalates the fighting to a crazy level. From there, the story takes a while to unfold. Ashline leaves her school in favor of a private school, far away from the events of the first chapter.

Knight was able to write fantastic characters. They encompass the teen years perfectly. With each character, not only could I picture them as real, but I could see how they would have fit into my high school circle of friends. Ashline’s sarcasm won me over. She had a quick wit and a dry humor that I loved. Colt is sweet and persistent without being too much. Even Eve, the evil sister was written well. She was evil, but Knight wrote cracks into her toughness.

My main problem with the novel is how long it took to get to the things in the book description. Maybe it’s because I was expecting something else based on that description, but I found myself anxious and not in a good way. I was interested in the action of the book description. It’s quite possible that if someone had handed me the book, told me it was about a teen goddess, and sent me on my merry way, I would have enjoyed it more. I just didn’t find myself enjoying the build-up. It seemed like there was a lot going on, but it didn’t seem to move the novel forward much.

The other thing that turned me off right away was the fight in the beginning. Not that it was over a boy, things like that happen when you’re a teen girl. I was a little bothered by how violent it was even before Eve arrived and made things worse. I’m not usually bothered by violence, but something about these few opening scenes bothered me. It might be because I didn’t know the characters before being dropped into the middle of a violent fight.

Ultimately, this wasn’t the book for me. The characters were well written, but that couldn’t make up for the rest of the novel. Things took a little too long to develop and by the time the action really started, I was already taken out of the novel. I know this will be a book for some, but just not for me.

If you’d like to purchase a copy of Wildefire, you can do so here:
Amazon
Barnes and Noble
IndieBound