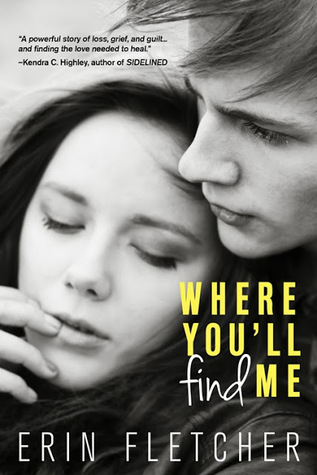 When I decided to request an ARC of Where You’ll Find Me, I wasn’t sure if I’d like it. It had the potential to be either really bad and cheesy or really amazing. A teen drowning her sorrow through drinking and partying meets a boy hiding out in her garage. I think if Fletcher has chosen to stay at surface level and focus on the romance, it would have been a bit of a flop for me. Instead, she uses the relationship as a catalyst for Hanley to face her demons, as well as make the reader think about death.

Hanley changed in middle school. She went from being a sweet, behaving daughter to rebelling with drinks and partying. She drowns her pain with alcohol and surface-deep relationships. She knows she’s doing this, but she doesn’t see a reason to change. She’s managed to run away from her problems and keep them from catching up. When she finds Nate living in her garage, things begin to change. Drinking and partying don’t sound as fun. Being with this adorable boy sounds better than anything else. Through their relationship, both Hanley and Nate face their life choices and come to terms with things beyond their control.

Hanley was a fascinating character. She blames herself for things that she couldn’t know. She’s broken, but instead of showing her true pain, she distracts herself and others from seeing the truth with alcohol. If people only see her acting like a misbehaving teenager, then people can’t see just how much she’s really hurting.

Hanley distracts herself from her problems and Nate runs away from them. That’s why Hanley finds him living in her garage. He’s sweet and charming, but vulnerable as well. He kept his secrets hidden even as Hanley opened up to him. It’s clear he’s hurt by the secrets he’s keeping, but he doesn’t see a way to avoid them other than running away. What starts as an easy friendship turns into something more. Hanley’s forced to face her demons, but with Nate there, she has someone to lean on and get strength from. She’s able to speak her mind, say everything she feels, and to have someone there to listen. When Nate is the one who needs help, she’s ready to be there for him. It’s a wonderful relationship that digs below the surface and forges connections based on more than a feeling.

Where You’ll Find Me is about so much more than a girl falling for the guy hidden in her garage. It talks about death, blame, and forgiveness in a real and touching way. It’s a fantastic read.

If Where You’ll Find Me sounds like your kind of novel, you can purchase it here:
Amazon
Barnes and Noble

Thank you to NetGalley and Entangled Teen for a copy of the novel in exchange for an honest review.