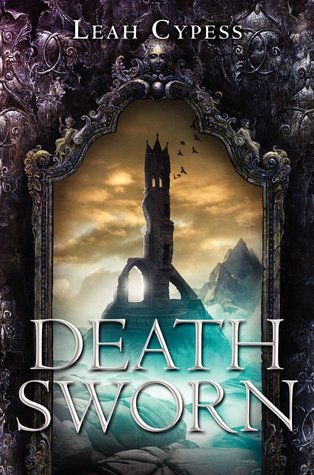 Death Sworn takes a girl, places her in a near-impossible situation, and makes her do the impossible. It had action, mystery, and secrets. There’s a little bit of romance in there, but it doesn’t overwhelm the rest of the story. It was a great read.

Ileni is losing her magic. She was once thought to be one of the most powerful sorceresses, but now she’s been sent on a nearly impossible mission. She knows the only reason she was selected was because the Elders knew she’d fail. She was a disappointment to her people and sees this task as the last contribution she can give. She knows it will cost her life, but she is determined to learn all she can about the assassins before that time.

Ileni is not the strongest character physically. She’s losing her magic and has no fight training. She’s living in an underground cavern filled with assassins who know how to kill in as many ways possible. Her only hope is that she lives long enough to find some information that’s valuable. Sorin, the assassin assigned to protect her, helps keep her safe, but she’s not entirely sure she can trust him completely to do that. Every assassin listens and obeys every order the master gives and her life is dependent upon the master not ordering her death.

Ileni is clever and works with what she has. She makes the best out of her waning magic, teaching her classes in a way that doesn’t give her secret away. She learns to fight to protect herself. She questions the morals of herself and the assassins. Sure, she has her flaws, but she finds a way to work around them. She tries to keep those flaws from interfering too much with her goals. She doesn’t make the mistake of trust anyone but herself.

Sorin is commanded to protect her. They develop a friendship that leads to a little something more. Even so, it can be difficult to see Sorin battle between doing things he wants to do and doing the things the master tells him to do. The master saved him and gave him purpose; to go against him doesn’t seem right. I’m glad Ileni, while dependent upon him for protection against the other assassins, doesn’t look to him for everything in her life.

Death Sworn is an excellent fantasy novel that has an interesting setup for what comes next. There’s murder and mystery, magic and power. I can’t wait to read what Ileni does next.

If you’d like to purchase a copy of Death Sworn, you can do so here:
Amazon
Audible
Barnes and Noble
IndieBound

Thank you to Edelweiss and Greenwillow Books for an advanced copy of the novel in exchange from an honest review.