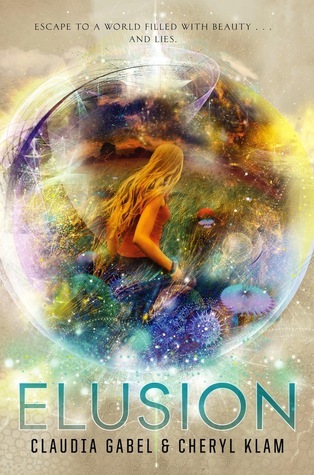 Elusion had me interested as soon as I read the description. This is a future world that I can picture. One where the world is a mess and people are looking to escape. Elusion gives people the ability to leave the real world and enter a place where everything feels good. It’s a great science fiction story that falls a little flat in some areas.

Regan’s father is the creator of Elusion, a collection of devices that take the user to a world where nothing hurts and everything is good. Her best friend Patrick is her father’s protégé, working together to create the devices and programs. Even though Regan should be close to the project, her father never included her much in the process, and now that he’s died, she is even less knowledgeable about the program. So when allegations are made against Elusion and its possible addictive side effects come to light, all Regan knows is she needs to defend her father since he can’t defend himself.

Regan has possibility. She wasn’t the strongest character in the beginning, but I can see her growing. She’s no longer taking a backseat; she’s fighting for a voice. She loses her mind around Josh a bit, but she’s also a teenager. Teens tend to do that. She’s not my favorite heroine I’ve read, but she does hold promise to grow.

I have some of the same issues with Josh. I feel like we know him on the surface, but there’s so much more we could know. He’s interesting and obviously good-looking, but I feel like we could dig so much deeper into his character. There’s nothing really wrong with him, but his character was missing some pieces.

The storyline itself drew me right in. It’s something different. I would have liked a little bit more world building, but it wasn’t vital to understand the story. The environment was secondary to the Elusion program. The state of the world was only important because it explained why people were so eager to escape.

Elusion has promise, but it didn’t quite live up to expectations. It was good, but it had the potential to be great. I’ll definitely read whatever comes next. This is a good read, but don’t expect to be absolutely blown away. Gabel’s writing gets stronger as the book goes on, so I have hopes for the next piece of the story.

If Elusion sounds like your kind of novel, you can purchase it here:
Amazon
Audible
Barnes and Noble
IndieBound

Thank you to Edelwiess and Katherine Tegen Books for an advanced copy of the novel in exchange for an honest review.