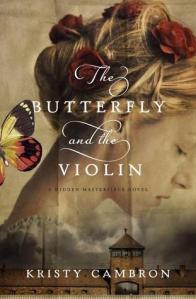 By now, it should be no surprise that I’ll read anything that is related to history. Second only to the turmoil of the European royal families, World War II era works fascinate me. The extreme honor and horror that came out of one war has always pulled at my heart. When I read the description for The Butterfly and the Violin and read there would be a connection, I knew I had to read it. My only hope was that Cambron would be able to weave the past with the present in a beautiful way. She succeeded.

The Butterfly and the Violin tells the story of two women, separated by decades and only connected through a painting. Sera saw a painting when she was younger that connected to her in a powerful way. She grew up thinking about that painting, and as an adult, she devotes much of her time to searching for that painting. Adele is the star of Austrian high society. She plays violin for the Vienna Philharmonic until it is discovered she helped smuggle Jews out of the country with a fellow musician. She is sent to Auschwitz, where her only chance of survival is her ability to play violin. As long as she can play, she has a chance.

Adele is the woman in the painting. Her story, from beginning to end left me feeling raw. She begins the novel with such hope and love, and being in the concentration camp clearly begins to strip her of that. She realizes that she didn’t know as much about the world as she thought she did. She knew how horrible the world had become, but it hadn’t really clicked in her mind yet. It’s one thing to know, but it’s another thing to actually understand. Decades later, as Sera searches for the painting with the aid of William Hanover III, the painting causes Sera to search herself for how she wants to fit into the world. It was wonderful how these two women were connected.

The story itself was beautiful. Adele’s fall from glory may have caused others to give up on finding anything good in life, but it didn’t for her. She found reasons to continue trying to live. Even in the direst of situations, she tries to find a glimmer of hope. Sera has focused for so long on her career and this painting that every other aspects of her life have fallen to the background.

The only part of this book that had me really worried was the fact that it is a Christian book. Both women address God and question His role and purpose in their lives. Without becoming too preachy or heavy, Cambron placed little pieces of Christianity throughout the book. Especially in Adele’s case, her faith made me think. She is a Christian woman in a camp built to destroy Jews. There could have easily been added tension there, but from the beginning it is clear that Adele does not care what religion a person is, as long as they are kind and moral. The religion was perfectly woven into the story, in my opinion.

The only thing that bothered me was I wanted more of Adele’s story. Not because I felt like it was needed, but because I wanted it. Every time something happened to Adele, the time would switch and I’d be left wondering what would come next for Adele. Sera’s story was great and well written, but just because I’m a history nerd, I wanted more of the historical story. This complaint really has no reflection on the quality of the story. It’s just my personal preference bleeding in.

The Butterfly and the Violin is a beautifully written story about two vastly different women tied together by one of the worst times in human history. This is a wonderful book for anyone who loves history, and even if you don’t, Adele’s story of love and bravery will bring you nearly to tears by the end of the novel. It’s lovely and gorgeous, even in the face of the ultimate ugliness.

If The Butterfly and the Violin sounds like a book you’d like to read, you can purchase it here:
Amazon
Barnes and Noble
Indiebound

Thank you to Netgalley and the publisher, Thomas Nelson Fiction, for an advanced copy of the novel in exchange for an honest review.