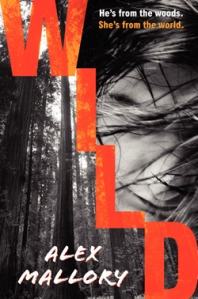 I wasn’t sure I would enjoy reading Wild. It is an interesting idea for a novel, but I felt like there were a lot of places things could go wrong. I didn’t want to be reading and enjoying the book, and then be taken completely out of the novel. I gave the book a change, though, and I’m incredibly happy I did.

All Cade has known is life in the wilderness. He lived with his mother and father and was always told viruses had destroyed the world. People were wiped out and anyone left was dangerous. He learned how to take care of himself and live off the land. His parents died, and he had been on his own for three years, when Dara and her boyfriend come to his area to camp. Dara is only the second female he’s ever seen, and is so different from his mother that he wants to meet her. When Cade finally comes out from hiding, it opens doors no one knew existed. Cade is thrown into city life and quickly becomes overwhelmed. Dara is one of the few people he trusts and who believes him. All Cade wants is to get back to the home he knows, but nearly everyone is trying to keep him from going back.

I felt so much for Cade. He has known only one life, but he’s suddenly thrown into a new world, one he thought was gone, and he’s faced with people who don’t believe him and don’t trust him. He risked everything he found comfort in to say hello to Dara because she looked like no one he had ever seen before. Cade is fascinated by the world, but he just wants to get back to the world he knows.

Dara knows that she and her boyfriend are heading in different directions, but she can’t seem to bring herself to put a final end on things. Seeing Cade only makes her more sure that her relationship has reached an end. It’s clear that there’s an attraction with Cade, but both of them don’t acknowledge that, instead focusing on getting to know and understand each other. She’s extremely caring and I enjoyed her character. Her growth from beginning to end was perfect.

I’ll admit I wasn’t sure about a Tarzan retelling. My favorite part of the Disney story was the gorillas, not the actual story. But Wild is so much better. The characters made me care about the story. I wanted everyone to be happy, but knew that’d be nearly impossible for that to happen. But the ending was the most perfect one I could imagine. It’s open, but I still got the feeling that everything ended how it was supposed to. I can easily picture the future for these characters in a way that makes me happy.

Wild was the book I hoped it would be. Everything was handled the way it needed to be, and nothing felt wrong. Cade was the perfect mix of wild and civilized. Dara was the best person to find him. I loved everything about this story.

If you’d like to read Wild, you can purchase it here:
Amazon
Barnes and Noble
IndieBound