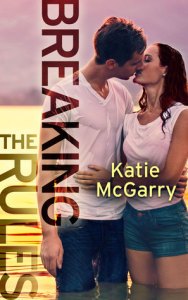 After finishing Pushing the Limits, I felt satisfied with the ending. It wasn’t a happily ever after ending, but it still felt right for Echo and Noah. So I wasn’t really sure I wanted to read Breaking the Rules. I didn’t want to read more of their story and end up feeling let down by whatever came next for them. The little glimpses into their lives from the other novels in the series were good enough for me.

Thankfully, McGarry created a fantastic continuation of Echo and Noah’s story. It felt authentic to the characters, even if that authenticity meant they annoyed me at times. So many of their issues could be fixed, even avoided, if they just talked to each other. However, I do realize that it’s not entirely how their characters would act. They aren’t really talkative characters, at least about things that are difficult to talk about.

Echo is still trying to separate herself from her mother. She’s trying to make it on her own as an artist, relying only on her talent and not her name. She and Noah took a road trip to try and get her art into galleries and shows across the United States. She’s trying to become a better person, one that doesn’t let her past haunt her as much.

Noah is being the supportive boyfriend. He finds work where he can, and is just enjoying his time with Echo. When he learns just how close one of their stops brings him to his family, he has to decide if he wants to face the family his mother left behind, or continue moving forward in life, trusting his mother’s judgment in ignoring them.

Through all of this, their insecurities are working against them. Echo still feels like the girl who isn’t worthy of real love. She still feels like the “leftovers,” her father has a new family and she’s what left from his old one. Her mom’s focus is her art, and Echo gets whatever she attention her mother might have leftover. Noah knows he isn’t the person he wants to be for Echo. He wants to give her more than he can at the moment, and he’s worried that Echo will leave him before he can become the man he wants to be.

Like I said, a lot of their issues would have been solved if they could really talk to each other. Sure, they have meaningful conversations, but it’s rarely about their insecurities. If it does, it only grazes the surface.

If you enjoyed Pushing the Limits, I highly suggest reading Breaking the Rules. The look into their relationship is wonderful, and really wraps up their story well.

If you’d like to read Breaking the Rules, you can purchase a copy here:
Amazon
Barnes and Noble
IndieBound