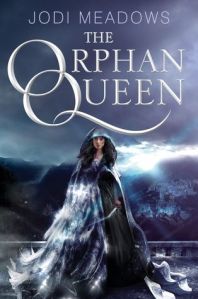 The book description from Goodreads:

Wilhelmina has a hundred identities.

She is a princess. When the Indigo Kingdom conquered her homeland, Wilhelmina and other orphaned children of nobility were taken to Skyvale, the Indigo Kingdom’s capital. Ten years later, they are the Ospreys, experts at stealth and theft. With them, Wilhelmina means to take back her throne.

She is a spy. Wil and her best friend, Melanie, infiltrate Skyvale Palace to study their foes. They assume the identities of nobles from a wraith-fallen kingdom, but enemies fill the palace, and Melanie’s behavior grows suspicious. With Osprey missions becoming increasingly dangerous and their leader more unstable, Wil can’t trust anyone.

She is a threat. Wraith is the toxic by-product of magic, and for a century using magic has been forbidden. Still the wraith pours across the continent, reshaping the land and animals into fresh horrors. Soon it will reach the Indigo Kingdom. Wilhelmina’s magic might be the key to stopping the wraith, but if the vigilante Black Knife discovers Wil’s magic, she will vanish like all the others

Jodi Meadows introduces a vivid new fantasy full of intrigue, romance, dangerous magic, and one girl’s battle to reclaim her place in the world.

I’ve had The Orphan Queen on my “to read” list for a while, but just kept passing over it. I’m not sure why I kept waiting, but I did. I only started reading it because I wanted a book that would take me out of this world and drop me into an entirely new one.

The world building was wonderful. I never felt confused about the world Meadows created. I could picture everything easily, from the Osprey’s hideouts to the streets to the castle. Even the magical descriptions seemed real. Everything seemed to blend together so well that I felt as though I had been dropped right into an alternate world.

The characters were just as real. I couldn’t help but root for Wil. She wasn’t one to make rash decisions often, preferring to think about her options, if she could, before acting. As a result, she wasn’t always trying to correct for mistakes. Sure, she wasn’t perfect, but her mistakes made her even more relatable.

Her interactions with Black Knife had me smiling. Their relationship highlighted the idea that people are not black and white. A person is not wholly bad if he or she makes a bad decision, just as a person is not completely good. There are more facets to individuals than could ever be discovered, even if people had all the time in the world to do so.

While there is a bit of a setup for a love triangle of sorts, it didn’t bother me. It never felt like a device to increase the tension. It felt like a young woman who is suddenly around many new people and is experiencing attraction for the first time.

Surprisingly, the cliffhanger ending didn’t bother me. It was a punch to the gut to be sure, but it didn’t make me angry or make me like the book any less.

I would definitely recommend this book for anyone who enjoys fantasy. You’re dropped right into the middle of a new world and it only gets better from there. You’re completely enveloped in the lives of these characters. Is it the best fantasy book I’ve ever read? No. But that doesn’t mean it’s not worth your time.