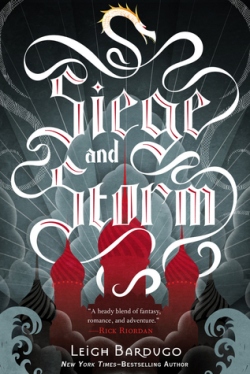 Title: Siege and Storm
Author: Leigh Bardugo
Series: The Grisha Series
Publisher: Henry Holt and Co.
Published: June 4th, 2013
Rating: ★★★★★ (5 out of 5)The summary of Siege and Storm from Goodreads:

Hunted across the True Sea, haunted by the lives she took on the Fold, Alina must try to make a life with Mal in an unfamiliar land. She finds starting new is not easy while keeping her identity as the Sun Summoner a secret. She can’t outrun her past or her destiny for long.

The Darkling has emerged from the Shadow Fold with a terrifying new power and a dangerous plan that will test the very boundaries of the natural world. With the help of a notorious privateer, Alina returns to the country she abandoned, determined to fight the forces gathering against Ravka. But as her power grows, Alina slips deeper into the Darkling’s game of forbidden magic, and farther away from Mal. Somehow, she will have to choose between her country, her power, and the love she always thought would guide her–or risk losing everything to the oncoming storm.

I’ll be honest. I have a pretty low bar for the middle books in trilogies. They’ve let me down in the past, focusing too much on just connecting the first and last books without offering as much in the way of development and substance. Sometimes it just feels as though what happens in a middle book could be condensed and split between the end of Book one and the beginning of Book 3. However, Siege and Storm does nothing of that. It’s clearly its own book, and develops the story so much more.

Alina. She started coming into her own power in the first book and now she’s trying to understand both her power and her desire for more. She’s no longer the girl in Mal’s shadow. She’s grown into her own strength and is asserting herself more and more. She’s stronger, both in terms of her power and in terms of her personal strength. Yet, she’s also discovering that with that power comes a hunger for more.

She can see why people fall victim to power. One taste leaves them hungry and they continue to search for more. She’s searching for more strength, more power. While part of her wants it because she believes it’s how to defeat the Darkling and eliminate the Shadow Fold, another part of her just wants it. She wants to know that power, wants to know how she’d feel with it.

Her internal struggle was fantastic. It’s clear she’s torn at times, wanting to be the same person Mal fell in love with while understanding she can’t be that same person anymore. She doesn’t know how she wants to move forward, only that she needs to keep doing more. She’s struggling with herself, struggling with Mal, and she doesn’t know how to bring those two sides together just yet.

Toss in a new character and she’s even more confused. I never really viewed the Alina/Sturmhond relationship as comparable to Alina and Mal. It’s not really the same thing. However, Sturmhond makes her think, pushes her, doesn’t let her rest. He’s a force she’s never really encountered before and isn’t sure how he’ll fit into her life.

As an aside, Sturmhond is, quite possibly, the best at witty banter and I might love him a little bit. Like Alina, I alternated between a fondness and wanting to punch him, but the entire time I was smiling.

As for the storyline, there’s really never a break. The book opens with some sweetness, away from the darkness Alina and Mal left behind at the end of Shadow and Bone. But then they’re right back in the middle of things and my head was spinning from trying to keep up.

Much like the previous book, I really didn’t have any problems. Mostly, I was annoyed that I’m human and, as a result, have to do this thing called “sleep” instead of reading for days straight. That’s really not a problem with the book, that’s a problem I’ve had with life, beginning when I was a kid.

If you liked Shadow and Bone, you’ll love Siege and Storm. Again, this is a fantasy series for fantasy lovers. It’s got action, romance, amazing plot, and superb character development. I really can’t recommend this book and series enough.