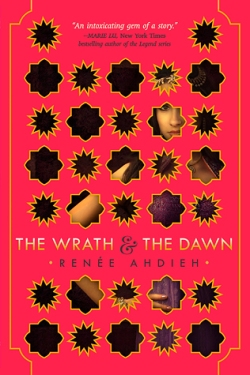 Every dawn brings horror to a different family in a land ruled by a killer. Khalid, the eighteen-year-old Caliph of Khorasan, takes a new bride each night only to have her executed at sunrise. So it is a suspicious surprise when sixteen-year-old Shahrzad volunteers to marry Khalid. But she does so with a clever plan to stay alive and exact revenge on the Caliph for the murder of her best friend and countless other girls. Shazi’s wit and will, indeed, get her through to the dawn that no others have seen, but with a catch . . . she’s falling in love with the very boy who killed her dearest friend.

She discovers that the murderous boy-king is not all that he seems and neither are the deaths of so many girls. Shazi is determined to uncover the reason for the murders and to break the cycle once and for all.

I can’t remember how old I was when I first heard A Thousand and One Nights, but I remember finding myself fascinated. While the context of the stories (a man marries a virgin and has her executed the next day before she can prove unfaithful) was something I didn’t really connect with, the fact that storytelling was used to prolong life was something I could understand. The Wrath and the Dawn is inspired by A Thousand and One Nights, it adds so much more and creates such a unique experience that I could hardly catch my breath as I read.

First of all, the setting is absolutely gorgeous. Ahdieh does a fantastic job of describing the world around Shazi, painting a beautiful picture filled with details and vibrancy. It was easy to picture the halls Shazi walked, the city surrounding them…everything was there in such a way that I felt like I was walking right alongside her.

But beyond that, the characters and their interactions are what made this novel work for me. It’s not heavily reliant on action sequences, preferring a more lyrical exploration and development of the characters and story. Shazi, set on avenging the murder of her best friend, volunteers to be Khalid’s next bride. She intends to delay her own execution as long as possible, while figuring out Khalid’s weaknesses so she can murder him as he has murdered countless young women.

Shazi never loses that fierce touch, but as the story unfolds, she comes to understand that she does not have the entire story. The man in front of her looks nothing like a monster and behaves differently than she expected. It’s not so much that she looses her anger towards him, as she starts to understand that there is more to him than just being the villain. She never truly excuses what he’s done, because it’s inexcusable, but she comes to learn that his choices are not done out of heartlessness. There’s more to his story than just a vicious killer.

Khalid struggles with what he does. As his secrets are revealed, we come to learn that he’s made mistakes and those mistakes placed him in a no-win situation. He’s had to become even more reserved, more protected. He learned that his words can have a greater impact than he ever thought possible. As a result, he is quiet, taking the time to carefully think out what he’s going to say. When he does speak, he makes sure it counts.

I was a little worried about how a situation in which the woman is trying to survive long enough to murder her husband, who has murdered every bride before her, was actually going to develop into romance. There’s a lot of ways it could go wrong or could end up feeling forced. But it doesn’t. It’s a slower process, letting Shazi learn more about Khalid as Khalid tries to grapple with the choices he’s making. It takes time for their relationship to develop, which gives us time to really savor and appreciate it.

The idea of magic was introduced a little in this book, but I felt like it wasn’t fully addressed. It didn’t really take much away from the rest of the story, but I do wish there had been just a little more. I’m holding out hope that it will play a bigger role in the next book, though.

This is definitely more of a character driven novel than an action driven one. If you need battles and fight scenes every other page, this book might feel a bit slow for you. However, if good characters is what draws you to this novel, definitely pick this one up.