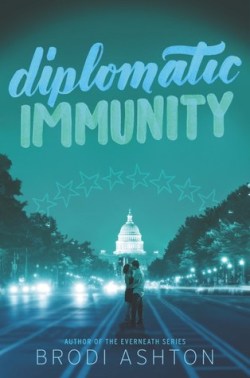 Aspiring reporter Piper Baird decides to write a scathing exposé on the overprivileged students at an elite Washington, DC, school, only for her life to change when she begins to fall for the story’s main subject, in this new realistic contemporary romance from Brodi Ashton, the author of the Everneath trilogy.

Piper Baird has always dreamed of becoming a journalist. So when she scores a scholarship to exclusive Chiswick Academy in Washington, DC, she knows it’s her big opportunity. Chiswick offers the country’s most competitive prize for teen journalists—the Bennington scholarship—and winning will ensure her acceptance to one of the best schools in the country.

Piper isn’t at Chiswick for two days before she witnesses the intense competition in the journalism program—and the extreme privilege of the young and wealthy elite who attend her school. And Piper knows access to these untouchable students just might give her the edge she’ll need to blow the lid off life at the school in a scathing and unforgettable exposé worthy of the Bennington.

The key to the whole story lies with Rafael Amador, the son of the Spanish ambassador—and the boy at the center of the most explosive secrets and scandals on Embassy Row. Rafael is big trouble—and when he drops into her bedroom window one night, asking for help, it’s Piper’s chance to get the full scoop. But as they spend time together, Piper discovers that despite his dark streak, Rafael is smart, kind, funny, and gorgeous—and she might have real feelings for him. How can she break the story of a lifetime if it could destroy the boy she just might love?

After finishing The Raven King, I needed something different. Sometimes the only way I can get over a book hangover to read a completely different style of book, to shake my mind out of the previous book. Diplomatic Immunity was that book. It was cute and sweet, with just a touch of heartache.

I liked Piper’s determination. She’s driven and focused, knowing that if she ever wants to achieve her dreams, she’ll have to put in the work for it. She’s a take-no-prisoners kind of girl. In the past, that attitude worked for her. Unfortunately, she learns that approach can end up hurting the people she cares about.

I also appreciated the slow build on the Piper-Rafael romance. They dance around each other, Piper has a bit of a crush on him, he finds her unique and interesting…but it’s not instant love. Ashton lets their story develop and grow before adding that into the mix, which was really nice to read.

I also enjoyed how Piper’s view of the other kids at her school evolved slowly. Sometimes books show a character’s mindset changing too quickly to be believable for me. I love when a character learns and grows, but I don’t think people do that overnight. Ashton writes Piper’s conflicting feelings, her questioning her own ideas about the people at her school. She struggles with reconciling what she believes about them with what she learns about them. Her struggle, and her ultimate growth beyond her initial thoughts on the diplomatic immunity students, was fascinating to read.

I felt as though parts were rushed and not really dealt with by the time the ending came. I don’t mind leaving a book with questions; in fact, I love having questions at the end of a book and examining both the book and my own reactions to try to find the answers. But I felt like there were a few loose ends that should have had endings.

If you’re looking for a sweet read that brings a smile to your face and only mildly twists your heart, this is the perfect book.

You Can Purchase Here: