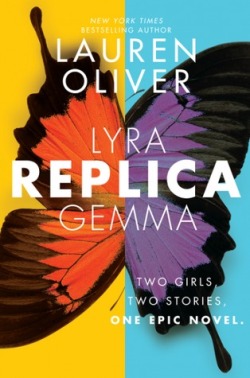 Replica is a really interesting take on clones, both in the plot and how the book is structured. Gemma and Lyra are unique characters whose stories start as far apart as you can get, but soon intertwine. Neither can get the answers they need without helping the other. The premise is unique, and despite a few flaws, the book is definitely worth a read.The summary of Replica from Goodreads:

Gemma has been in and out of hospitals since she was born. ‘A sickly child’, her lonely life to date has revolved around her home, school and one best friend, Alice. But when she discovers her father’s connection to the top secret Haven research facility, currently hitting the headlines and under siege by religious fanatics, Gemma decides to leave the sanctuary she’s always known to find the institute and determine what is going on there and why her father’s name seems inextricably linked to it.

Amidst the frenzy outside the institute’s walls, Lyra – or number 24 as she is known as at Haven – and a fellow experimental subject known only as 72, manage to escape. Encountering a world they never knew existed outside the walls of their secluded upbringing , they meet Gemma and, as they try to understand Haven’s purpose together, they uncover some earth-shattering secrets that will change the lives of both girls forever…

I don’t usually tell people how to read a book. Most books are pretty straight forward. But Replica is a little different. In my opinion, this book should be read by alternating the chapters between Gemma and Lyra’s point of view. It helps a little with the suspense factor and you’re able to read both stories without being spoiled.

As for the rest of the book, there’s a lot to like. The characters are interesting and I love different things about them.

Gemma has never felt like she belongs. She was sick as a child and that experience has stuck with her. She’s not stick-thin and feels self-conscious about it. It’s just another way she’s different from everyone else. She’s always behaved, listened to her parents, never done anything she wasn’t supposed to. She finally breaks out of her shell a bit when she decides to go to Florida, even though her parents have told her not to.

Although I liked Gemma, Lyra really stood out to me. She’s a “replica,” a human clone used for testing. It absolutely broke my heart that she accepts that she’s not human, that because she was created in a lab, she’s not equal to “real” humans. I know she doesn’t know better, that if you’re told all your life that you’re “less than,” you’re going to believe it, but it still broke my heart. She doesn’t see that she as more humanity in her than the people experimenting on her. Her story just tugs at my heart.

There’s a little bit of romance, but because it’s not explored too much, I don’t want to talk about it too much. I’m interested in how they develop as the story goes on.

The story is just a little predictable (I had the big twist figured out pretty soon after starting to read it), and while that doesn’t always take away from my experience reading the book, it did a little for this one. I also thought some of the medical explanations could have been explained a little more. I had to read a few paragraphs a couple of times to fully understand what they meant.

Neither of this issues really took away much from the overall story, but I just couldn’t give it the full five stars.

Lauren Oliver fans should definitely read this book. I also think if you’re interested in a book that makes you think about what it means to be human, Replica provides some good information to consider. It really makes you think.

You Can Purchase Replica Here: