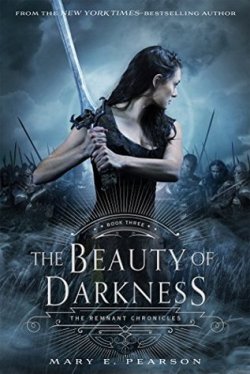 What an ending to this series. I mean…wow. I felt like I had been put through the ringer. Everything is not tied off with a pretty bow. Everything is not rainbows and happiness. But it is the ending these characters earned and deserved.The summary of The Beauty of Darkness from Goodreads:

Lia and Rafe have escaped Venda and the path before them is winding and dangerous – what will happen now? This third and final book in The Remnant Chronicles is not to be missed.

Full disclosure: I read this book while hospitalized. I picked up the series because I needed something not set in the real world. I needed a fully created world to lose myself in. Maybe that clouded my judgement of the series, but I still think it’s one of the best fantasy series I’ve ever read.

I think what makes it so great is how intricate everything is. It’s not just one simple story. There are many stories woven together, intertwining and twisting until it creates this series. I don’t think it’s even fair to call them stories…it’s portions of people’s lives. It reflects the real world in that life is not a single thread, it’s a compilation of everything that everyone goes through. You can’t have a single story in life and you don’t have a single story in this series. You have many.

The relationship between Lia and Rafe…man, it twisted my gut. They can no longer escape their responsibilities. Rafe is a prince, Lia is a princess. They cannot return to the people they were in the first book. The world has changed and they have to change with it. They are stressed, faced with new challenges…I don’t want to spoil anything so I’ll stop here.

Kaden…what can I say about Kaden? It’s clear he has a fondness for Lia, but it never felt fully authentic to me. There was a layer of emotion that I couldn’t get through with him. I think he loves the idea of Lia, the idea of someone loving him without expectations. He only ever felt that love once and it was taken from him. He wants it again and thinks he’s found it in Lia. Again, I don’t want to spoil anything, but how his story is wrapped up is absolutely perfect.

I thought to focus on how history repeats itself was interesting. You’ve heard of the saying that those who don’t understand history are doomed to repeat it? This book demonstrates that. Through time, the real history of the land has been lost, replaced with a history that has elements of the truth, but has been changed o reflect the views of the people. As a result, the kingdoms are doomed to repeat history. Lia understands this and wants to change the future. She may not have the complete history, but she knows enough to fight against it.

There was absolutely nothing I didn’t like about this book. I was sad to see it end, but I felt like it was the perfect ending for these characters and this book.

Everyone. Everyone needs to read this series. It’s vast and intricate and incredible. It’s fantastic.

You can Purchase The Beauty of Darkness Here: