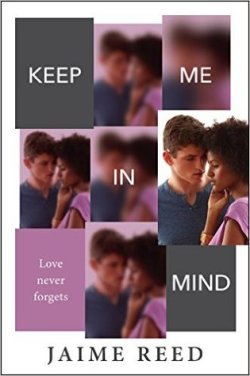 Quick Look: Unique characters, a promising storyline, and a lyrical flow come together to create a story about love and rediscovering yourself.The description of Keep Me In Mind from Goodreads:

A girl who doesn’t remember. A boy who can’t forget her. A wise, witty, and heartbreaking love story for today’s YA generation.

Ellia Dawson doesn’t recognize the handsome boy who sits in tears by her hospital bed. But he’s telling her that he’s Liam McPherson, her boyfriend. Boyfriend? Ellia thinks in shock. She has no clue who Liam is, let alone whether or not she once loved him. She remembers her family, her friends, and the fact that she wants to be a fashion designer. But Liam is a big blank in her life.

Meanwhile, Liam is devastated that Ellia, the love of his life, who suffered an accident while they were running together on the beach, has lost her memory. He is desperate to win her back, rebuild what they once had, but Ellia keeps him at an arm’s length. She’s much more comfortable with a new boy she meets at the hospital, who understands more what she’s going through. So Liam begins writing the story of the two of them, piecing together the past in the hopes of having a future with the girl he loves.

Told from alternating perspectives, this is a lyrical, clever, and surprising novel from Jaime Reed.

Keep Me In Mind is told from the alternating perspectives of Liam and Ellia. Liam knows what caused Ellia to forget the last two years, but doesn’t want to face it. Ellia can’t remember those years and isn’t sure she wants to.

Liam loves the Ellia he dated for two years. He loves her spirit, her fire, her fierceness. Yet that girl is not the one that he sees. That Ellia was changed in the accident and will never be back in the same way. Liam spends the book reflecting on that girl and trying to find a way to reconcile the past with what he wants for the future.

Ellia can’t remember the girl her friends talk about. She can’t remember the trouble they got into and she’s not entirely proud of those actions. She’s not sure if she wants to remember those years and return to the girl she was. She’s trying to figure out who she is now, but with everyone talking about who she used to be, she’s struggling to feel comfortable with herself.

Aside from those issues, Ellia and Liam’s families doesn’t really want them together. They are an interracial couple, and on the surface, it seems like that might be the reason their families fight against it. However, there’s more to it than just the racial divide.

One thing that Ellia’s amnesia brings forward is the unhealthiness of Ellia and Liam’s relationship. It’s not that their relationship is abusive or dangerous, but it’s not the best for either of them. As Liam reflects back on their relationship, he writes their story. He sees that he changed in some ways; some change was good, others was not. Ellia sees that she may not have treated Liam in the best way and that makes her want to be a better person.

Finally, and I’m sure some will disagree with me, I loved the ending. I don’t want to spoil it, but I thought the ending was the perfect way to wrap up this little glimpse into Ellia and Liam’s relationship.

I didn’t have any major issues with the story, or even minor ones.

Fans of contemporary stories will enjoy this book. It’s got a beautiful writing quality to it that makes the words flow off the page and swirl around you.

You can purchase Keep Me In Mind here: