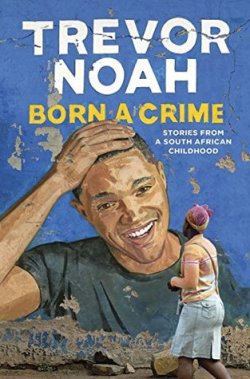 Quick Look: I’d enjoyed Noah’s take on the world from watching him on The Daily Show. Born a Crime gave me new respect for him as a person, separate from his comedic ability, and is easily one of the best non-fiction books I’ve read in a long time.The summary of Born a Crime from Goodreads:

The compelling, inspiring, and comically sublime story of a young man’s coming-of-age, set during the twilight of apartheid and the tumultuous days of freedom that followed

Trevor Noah is one of the comedy world’s brightest new voices, a light-footed but sharp-minded observer of the absurdities of politics, race, and identity, sharing jokes and insights drawn from the wealth of experience acquired in his relatively young life. As host of The Daily Show with Trevor Noah, he provides viewers in America and around the globe with their nightly dose of biting satire, but here Noah turns his focus inward, giving readers a deeply personal, heartfelt, and humorous look at the world that shaped him.

Noah was born a crime, the son of a white Swiss father and a black Xhosa mother, at a time when such a union was punishable by five years in prison. Living proof of his parents’ indiscretion, Trevor was kept mostly indoors for the first years of his life, bound by the extreme and often absurd measures his mother took to hide him from a government that could, at any moment, take him away. Finally liberated by the end of South Africa’s white rule, Trevor and his mother set forth on a grand adventure, living openly and freely and embracing the opportunities won by a centuries-long struggle.

A collection of eighteen personal essays, Born a Crime tells the story of a mischievous young boy who grows into a restless young man as he struggles to find himself in a world where he was never supposed to exist. Born a Crime is equally the story of that young man’s fearless, rebellious, and fervently religious mother—a woman determined to save her son from the cycle of poverty, violence, and abuse that ultimately threatens her own life.

Whether subsisting on caterpillars for dinner during hard times, being thrown from a moving car during an attempted kidnapping, or just trying to survive the life-and-death pitfalls of dating in high school, Noah illuminates his curious world with an incisive wit and an unflinching honesty. His stories weave together to form a moving and searingly funny portrait of a lovable delinquent making his way through a damaged world in a dangerous time, armed with only a keen sense of humor and a mother’s unconventional, unconditional love.

I was introduced to Trevor Noah like a lot of people were: The Daily Show on Comedy Central. He had a different take on the world and when he was announced as the new host, I was really excited to see what the show would become. When I heard he was publishing a book, I knew I wanted to read it.

The book should be sad. It details his childhood, from being born a crime to a white father and a black mother during apartheid. He didn’t feel like he ever completely fit into a group until he was older. He was separate, divided by his skin color, from the people around him. Yet, not once does Noah ever make it seem like he feels sorry for himself, or that he wishes his childhood had been different.

The relationship between Noah and his mother is beautiful and it’s clear that she is one of the major reasons he never feels sorry for how he grew up. She did not raise him to see his differences as negatives; she instilled in him the belief that his differences only made him who he is. I absolutely loved that.

I think getting to know Noah’s voice over the last year is what made this book so brilliant. I could hear his tone in every word. That helped make the book interesting instead of sad. Noah’s comedy style comes through the pages, making it completely enjoyable.

After finishing the book, I found a had a new level of respect for Noah. I’ve always enjoyed his comedic abilities, but now I see how he became that person. I see how he didn’t let a difficult childhood bring him down. He used his trials to make him a better person.

Nothing. It’s a brilliant biography.

Anyone who enjoys watching him on The Daily Show should definitely give this book a read. But anyone who just wants an uplifting and funny book should also pick it up.

You can purchase Born a Crime here:

Thank you to NetGalley and the publisher, Spiegel & Grau, for an advanced copy of the novel in exchange for an honest review.