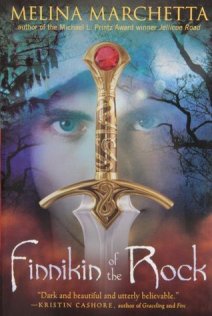 Summary of Finnikin of the Rock from Goodreads:

Finnikin of the Rock and his guardian, Sir Topher, have not been home to their beloved Lumatere for ten years. Not since the dark days when the royal family was murdered and the kingdom put under a terrible curse. But then Finnikin is summoned to meet Evanjalin, a young woman with an incredible claim: the heir to the throne of Lumatere, Prince Balthazar, is alive.

Evanjalin is determined to return home and she is the only one who can lead them to the heir. As they journey together, Finnikin is affected by her arrogance . . . and her hope. He begins to believe he will see his childhood friend, Prince Balthazar, again. And that their cursed people will be able to enter Lumatere and be reunited with those trapped inside. He even believes he will find his imprisoned father.

But Evanjalin is not what she seems. And the truth will test not only Finnikin’s faith in her . . . but in himself.

I’m a little ashamed at how long this book sat on my kindle. I’d look at it, think about reading it, and then pick a different book. If I’m being honest, the book sat on my kindle, unread, for a couple of years. I’m beating myself up a little over that because if I had read it when I first bought it, I could have fallen in love with it so much sooner.

The world. The characters. The story.

I’ve always been able to get lost in a book. There are many times when my parents would have to yell at me to get my attention because I was so fully engrossed in a book. But rarely do I feel as though the real world has melted away and I am completely surrounded by the world of a book. Reading this book, I felt like I could reach out and touch the rock walls, the dirty streets, the tall trees. When I would look up and take myself out of the book, it was a shock to realize that I was sitting in my house and not in the world Marchetta created. Usually, that shock of realizing I still live in this world was met with a wave of disappointment. That’s how well Marchetta created her world. Even with all the evil in it, I wanted to be surrounded by it.

The characters are amazing. There’s a lot to say about Finnikin. He’s a boy who had to grow up fast. He might think he’s experienced everything evil, but he comes to realize there is more evil in the world than he could have ever experienced.

Finnikin is wonderful. Evanjalin is amazing. She is the hero that moves beyond the labels of “female” or “male” hero. She represents overcoming horrible odds because of faith and determination. She believes in herself, understanding that she is capable to reaching her goals. That does not mean she doesn’t need help; rather, she understands that one person cannot do everything, be everything to succeed. She relies on help, but she does not allow herself to be controlled by those who help her. She is amazing and is definitely one of the best heroes I’ve ever read. Together with Finnikin, she made me love every crevice of this book.

Even the secondary characters are developed and important. They are not merely pieces of a chess board Marchetta uses to aid Finnikin and Evanjalin. They are people who are impacted by every choice made and who have a part to play within the story. They are vital and carry weight as people, not just as characters.

Finally, the story itself is heartbreaking and beautiful. It is completely believable that Finnikin is running out of hope. He’s been unable to return to his home, unable to help the others who cannot return home and face awful treatment from other kingdoms. It’s hard to have hope when it appears as though all hope has left the world. Yet, Evanjalin still holds on to hope, and inspires it in others. Each moment of the story builds that hope, and I felt it as I read.

I don’t know. I’ve sat on this review for a few weeks and I still can’t come up with anything I didn’t like about it.