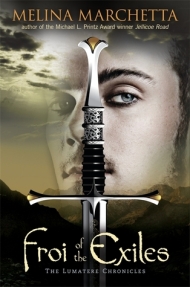 Summary of Froi of the Exlies from Goodreads:

Three years after the curse on Lumatere was lifted, Froi has found his home … or so he believes. Fiercely loyal to the Queen and Finnikin, Froi has been taken roughly and lovingly in hand by the Guard sworn to protect the royal family, and has learned to control his quick temper with a warrior’s discipline. But when he is sent on a secretive mission to the kingdom of Charyn, nothing could have prepared him for what he finds in its surreal royal court. Soon he must unravel both the dark bonds of kinship and the mysteries of a half-mad princess in this barren and mysterious place. It is in Charyn that he will discover there is a song sleeping in his blood … and though Froi would rather not, the time has come to listen.

Set three years after the events of Finnikin of the Rock shows how far Isaboe and Finnikin have come since reclaiming Lumatere. Froi is a faithful friend and ally to the royal family. He knows his duty is to serve first, be friends second. He’s also been somewhat unofficially adopted by a family, and he’s never felt so conflicted. While he finally feels as though he belongs, there’s a part of him that fights for the real truth of where he came from. His journey into Charyn to complete a task given to him by the Guard and a Charyn prisoner seems simple enough, but Froi is definitely not expecting what he sees and experiences once there.

Quintana is the last born girl of Charyn, born before a curse stopped any children from being born. She is believed to be the one to break the curse, along with the last born male. There is nothing romantic or easy about her life. Each time a last born male arrives, it’s her job to lay there and how she becomes pregnant. Each time a male comes to her bed, she disconnects with the reality of her situation, staying safe inside her mind. She’s called insane and unloveable. She’s nothing more than a tool for the kingdom, and once she does her job, there will be no more use for her.

Froi meets Quintana while posing as a last born male. Their relationship is interesting because of who they are as people. They’re both quick tempered and stubborn. It’s a challenge for Froi to try and understand the girl behind the madness. He is not supposed to be there for any other reason but his mission, yet his time in Charyn makes him think about who he is expected to be versus who he is and wants to be.

I could feel Charyn’s darkness bleeding through the pages. Lumatere suffered greatly at the hands of their Charyn invaders, and the parts of the story told in Lumatere show that three years has not been enough time to overcome those dark days. However, there was hope there. When that hope is contrasted with the dark heaviness of Charyn, it’s easy to see the power of hope.

Just like in Finnikin of the Rock, every character is amazing. They all have depth and personality. They are not one dimensional, with new information and traits emerging with every action. Their motivations, dreams, hopes, wishes, everything they want in the world come through their choices. While a character might say one thing, their mannerisms or actions point to another. They are deep I loved exploring who every character was.

I couldn’t find anything. I really couldn’t. I tried so hard to find something I didn’t like. I’d start to think of something, realize that I ended up understanding or liking it, and then I’d have to start all over.

While I know this book is perfect in my eyes, I know not everyone will love it. It’s dark, even discussing the systematic raping of a young girl. It’s not going to be for everyone. However, if you enjoyed Finnikin of the Rock, I think you should give this book a try. I don’t want to give a broad recommendation because it is so tough to read. Some people will love it, some will hate it, and some will not be able to or want to handle the darkness of the book. This is a person-by-person recommendation type of book.