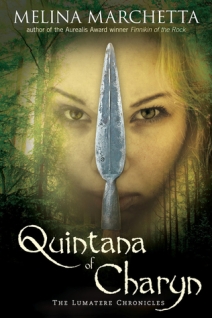 Summary of Quintana of Charyn from Goodreads:

Separated from the girl he loves and has sworn to protect, Froi and his companions travel through Charyn searching for Quintana and building an army that will secure her unborn child’s right to rule. While in the valley between two kingdoms, Quintana of Charyn and Isaboe of Lumatere come face-to-face in a showdown that will result in heartbreak for one and power for the other. The complex tangle of bloodlines, politics, and love introduced in Finnikin of the Rock and Froi of the Exilescoalesce into an engrossing climax in this final volume.

I’ve fallen in love with every one of these characters. Their stories are so beautifully written that my heart hurts a little bit when I think about them. Each character has gone through a different kind of heartache, and even though there is no perfectly happy ending because they can’t all go live together on an island where nothing bad ever happens and they’re always happy forever, I couldn’t help but hope for as happy an ending as they could have.

My heart broke for Froi when he and Quintana were separated. Nothing about their relationship was ever going to be easy, but something about that moment, at the end of Froi, made my heart just hurt. That’s how my heart felt going into this book. My heart was hurting, and even though I knew Marchetta would probably make it hurt even more before she might start healing it, I was ready.

Froi knows where he came from, and he’s trying to reconcile his beginnings with who he feels he is in Lumatere. His beginnings didn’t shape who he is. They are a part of him, certainly, but everything else in his life shaped who he became. His time as a theif brought him to Finnikin and Isaboe. His place in the Guard gave him a greater purpose. His adoptive family gave him a sense of belonging. Yet, knowing his true family fills a different part of who he is. Unfortunately, he feels torn in two, unable to reconcile the many different parts of him who ultimately make him who he is.

Quintana is running and hiding for her safety. She doesn’t know who to trust or where she can go. She relies on herself and her trust in Froi to get herself to safety. Everything she does is to protect the unborn child she carries; the hope of Charyn. She knows she is only valuable until that baby is born, yet she’s also a danger to those who would seek to claim the throne for themselves. She knows she carries the future of Charyn and will do anything to protect her child.

Lumatere and Charyn are brought together even more in this book. Their futures are connected, even though both kingdoms would rather not have to be connected. They don’t want to rely on each other for anything. There is so much bad blood between them, but they do share something in common. They both treasure Froi.

As I was reading, I had no idea how the book could end without my heart just breaking. There was too much pain between characters for me to see how a happy ending could come. However, Marchetta seems to enjoy playing with the hearts of her readers. Just as she’d deliver something that made another crack in my heart, she’d find a way to stitch up the hole she made a few pages earlier.

At the risk of sounding like I’m constantly repeating myself, I just love the characters Marchetta writes. They are what drive her novels. It’s important to create the world, of course, but Marchetta makes it her characters who create the world. Sure, she drops details about what places look like or where they are located, but it’s her characterisations that develop her world. They are the product of the world, and therefore the best representation of the world. By creating such vivid and amazing characters, she’s created a fantasy world that is enveloping and amazing.

Nothing. I didn’t even try to come up with anything bad because I knew I wouldn’t find anything.

Read this book if you read the other two. You have to. You need to know how everything ends. The Lumatere curse started everything and the ending of the Charyn curse brings the entire story together. This whole series is amazing for fantasy lovers. As long as you can read the dark themes of Froi of the Exlies, you should read this entire series.