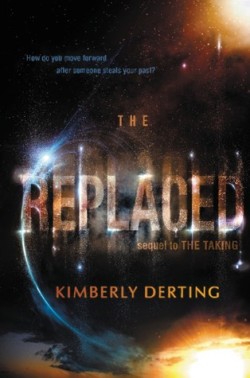 The summary of The Replaced from Goodreads:

Romantic and action-packed, The Replaced is the gripping second installment in the Taking trilogy.

Kyra hasn’t been the same since she returned from her mysterious five-year disappearance. Now, on the run from the NSA, Kyra is forced to hide out with others who, like her, have been Returned. Yet she is determined to find Tyler, the boy she loves who was also abducted—all because of her. When her group intercepts a message that Tyler might still be alive but is in the hands of a shadowy government organization that experiments on the Returned, Kyra knows it’s a risk to go after him. What if it’s a trap? And worse, what if the returned Tyler isn’t the same boy she lost?

Perfect for fans of The Fifth Wave and the Body Finder series, The Replaced is both chilling and explosive, with creepy, otherworldly elements and twisty, psychological thrills that will have you questioning what exactly it means to be human.

I’m a little hesitant to read books involving aliens. I don’t really know why. Maybe it’s because I used to watch Star Trek with my dad and sometimes those aliens were so corny I didn’t know what to think. Whatever the reason, books with aliens aren’t usually my thing. The only reason I picked up The Taking was because I adore Derting’s writing. It was extremely well-written and thought out, so I was really excited to read The Replaced. It picks up shortly after the end of the first novel and once again, Derting’s writing didn’t disappoint.

I really like reading as Kyra learns about herself and what happened to her when she was taken. She’s trying to be a regular teenager at the same time she’s fighting with and for the other Taken. She knows she can’t go back to before, but she’s not sure how she’s going forward. She’s different, even more so than the other Taken, but doesn’t know why or how. She’s confused, but I like that about her. It makes her seem more real, in a way, because she doesn’t just accept her new life and embrace it completely. She’s still struggling to come to terms with herself.

I was not expecting the ending. I don’t want to do spoilers, because it’s a good ending, but wow. I’m pretty sure my heart fell out of my stomach at the same time it got caught in my throat.

The book started out feeling like it was going to fall into the second book curse. It felt like a lot of information and not a lot of plot. I was really hoping the book wasn’t just going to be a connection between the first and the final book. Something to fill the space between the beginning of Kyra’s story and how it would end.

It took a little while, but eventually, things started to develop and the book pulled itself out form the curse. It became a novel of importance, that served as it’s own part of the story and not just a connection. By the end of the novel, the book had saved itself from just being filler.

I think fans of Derting will enjoy the series, as will science fiction fans. It’s not too heavy on the science, but it still poses some questions and has the possibility to become more. It’s a good introduction to the science fiction genre for people who aren’t sure if they’d be able to enjoy that type of reading.