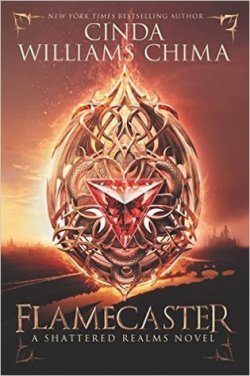 Set in the world of the New York Times bestselling Seven Realms series, a generation later, this is a breathtaking story of dark magic, chilling threats, and two unforgettable characters walking a knife-sharp line between life and death. This dazzling beginning to a new series is indispensable for fans of Cinda Williams Chima and a perfect starting point for readers who are new to her work.

Adrian sul’Han, known as Ash, is a trained healer with a powerful gift of magic—and a thirst for revenge. Ash is forced into hiding after a series of murders throws the queendom into chaos. Now he’s closer than ever to killing the man responsible, the cruel king of Arden. With time running out, Ash faces an excruciating choice: Can he use his powers not to save a life but to take it?

Abandoned at birth, Jenna Bandelow was told that the magemark on the back of her neck would make her a target. But when the King’s Guard launches a relentless search for a girl with a mark like hers, Jenna assumes that it has more to do with her role as a saboteur than any birth-based curse. Though Jenna doesn’t know why she’s being hunted, she knows that she can’t get caught.

Eventually, Ash’s and Jenna’s paths will collide in Arden. Thrown together by chance and joined by their hatred of the ruthless king, they will come to rescue each other in ways they cannot yet imagine.

I liked the mystery surrounding the characters. It’s clear from the beginning that two of the characters, Ash and Jenna, are on the “good” side. Their alliances are clear. They’re trying to fight against the tyranny of the king and protect those close to them. Other characters aren’t as clear and I really enjoyed getting to peel back their layers. Just when I was ready to dislike a character, he or she did something that would make me rethink their actions and try to figure out who their alliance belonged to.

Maybe I’d be able to glean even more from the worlds if I read the Seven Realms series first, but I thought Chima did a fantastic job of creating the world without going overboard. Not every part of the world is described, letting me fill in the pieces I think are missing. Maybe she’ll come back later and fill those pieces in herself, but for right now, I like the little bit of mystery.

I think what I enjoyed most is how the characters are woven together. Each of the main characters are connected directly, but also through their relationships with the other characters. There are levels of trust and distrust that make it difficult to understand how the characters truly think and feel about the others. As a reader, I’m left to forming my own judgements about each character based on how the others view them. There’s some good and bad to each character that makes them feel more like people than characters. I absolutely love when that happens.

The pacing of the story works. At times, things are happening left and right. Each page has a new twist or new momentum. Just when it feels like your out of breath, the pace slows and allows the characters to develop some more. And then, as you catch your breath, the plot gets moving again and you’ll along for the ride.

I can’t speak to how people who’ve read the previous series might enjoy this book. I can only speak as someone who went into it blind. I really enjoyed the characters themselves and found myself wanting to know more about them and the world. The ending certainly added a new layer of depth to the story that I’m excited to explore. I think it’s a good beginning to a fantasy world and would definitely recommend it.