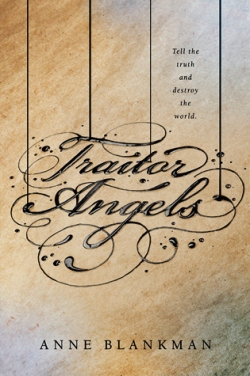 A romantic and exhilarating historical adventure about a girl who must unlock the secrets within Paradise Lost to save her father—perfect for fans of Revolution and Code Name Verity—from acclaimed author Anne Blankman, whose debut novel,Prisoner of Night and Fog, was a Sydney Taylor Notable Book for Teens in 2015

Six years have passed since England’s King Charles II returned from exile to reclaim the throne, ushering in a new era of stability for his subjects.

Except for Elizabeth Milton. The daughter of notorious poet John Milton, Elizabeth has never known her place in this shifting world—except by her father’s side. By day she helps transcribe his latest masterpiece, the epic poem Paradise Lost, and by night she learns languages and sword fighting. Although she does not dare object, she suspects that he’s training her for a mission whose purpose she cannot fathom.

Until one night the king’s men arrive at her family’s country home to arrest her father. Determined to save him, Elizabeth follows his one cryptic clue and journeys to Oxford, accompanied by her father’s mysterious young houseguest, Antonio Viviani, a darkly handsome Italian scientist who surprises her at every turn. Funny, brilliant, and passionate, Antonio seems just as determined to protect her father as she is—but can she trust him with her heart?

When the two discover that Milton has planted an explosive secret in the half-finished Paradise Lost—a secret the king and his aristocratic supporters are desperate to conceal—Elizabeth is faced with a devastating choice: cling to the shelter of her old life, or risk cracking the code, unleashing a secret that could save her father . . . and tear apart the very fabric of society.

I enjoyed Blankman’s duology about the rise of Nazi Germany, so I was excited to read Traitor Angels. It wasn’t too long ago that I was reading Paradise Lost for one of my college classes, so I was interested in seeing how that story was woven into Traitor Angels. There were secrets and puzzles…it was a fantastic story.

Once again, Blankman does an excellent job of bringing the period to life. That period of England’s history has power struggles and upheval…something that would affect every person in the kingdom. For Elizabeth, the period meant the temporary loss of her father, John Milton. His ideas were praised during the Commonwealth period and put him in great danger when the monarchy returned.

Elizabeth is intelligent, wanting more from life than to just be a housewife, but understanding that is unlikely to happen. She loves her father and helps him write his epic poem, scribing what he dictates. I thought she was the perfect mix between wanting something more and working to achieve it. She knows it would be expecting a lot to be treated and viewed as a man, but that doesn’t stop her from getting an education and learning how to sword fight. She’s cunning and kind, but doesn’t trust easily because of what has happened with her father.

Antonio was an interesting character. He doesn’t know why he’s been sent to visit Milton, only that his master told him he must go. He has no real connections to England, but stays to help Elizabeth because it is the right thing to do. He lets her take charge, knowing she will have a better understanding of Milton’s history than he would. However, he also knows when to step in and make suggestions or point the group in the right direction. He doesn’t have to be the one in charge, and doesn’t mind listening to a woman because he knows that’s what is going to help them the most. He also doesn’t mind Elizabeth’s education and thirst for more knowledge.

Their romance is sweet and slow and I loved it. Nothing felt rushed. Yes, there were some minor moments when simple communication would have solved a problem or two, but at the same time, because of Elizabeth’s hesitancy to trust others, I could understand those situations.

Finally, the secrets hidden in the story, and in Milton’s life, were really well done. They felt authentic and not contrived. Even though I had to do quite the analysis of Paradise Lost for my class and never came across any hidden details…I thought the explanations and reasons behind the clues discussed in the book made sense.

I felt as though Elizabeth’s development, in regards to her religion, wasn’t was fleshed out as it could have been. It felt that she went from being a staunch Puritan to questioning her beliefs quite quickly. I certainly don’t think there’s anything wrong with that kind of development, but it felt a little underdeveloped when compared to other parts of the story.

You don’t have to have a great understanding of the period to enjoy this novel. I think historical fiction fans will enjoy the book, as will mystery fans.