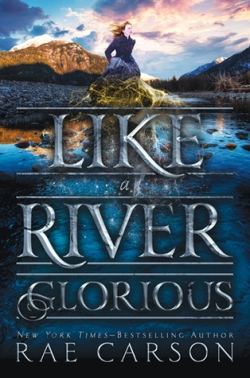 I just love everything Carson writes. Add in the fact that this, aside from Leah’s power, has an entirely real outlook on history, and I’m in love. I loved how Leah and her small group of friends grew and started a community that is filled with good people and how that group contrasts with the other people she meets. This is definitely a must-read book and series for me.The summary of Like a River Glorious from Goodreads:

After a harrowing journey across the country, Leah Westfall and her friends have finally arrived in California and are ready to make their fortunes in the Gold Rush. Lee has a special advantage over the other new arrivals in California—she has the ability to sense gold, a secret known only by her handsome best friend Jefferson and her murdering uncle Hiram.

Lee and her friends have the chance to be the most prosperous settlers in California, but Hiram hasn’t given up trying to control Lee and her power. Sabotage and kidnapping are the least of what he’ll do to make sure Lee is his own. His mine is the deepest and darkest in the territory, and there Lee learns the full extent of her magical gift, the worst of her uncle, and the true strength of her friendships. To save everyone, she vows to destroy her uncle and the empire he is building—even at the cost of her own freedom.

The second epic historical fantasy in the Gold Seer trilogy by Rae Carson, the acclaimed author of The Girl of Fire and Thorns.

I already loved Lee from the first novel. She’s tough and a fighter, setting out to cross the country on her own. Like a River Glorious continues that determination, but adds another element. She’s independent and doesn’t want the fact that she’s a woman to define her. She doesn’t want to lose her independence and power simply because she was born a certain gender. I loved how that determination came into play in her relationship with Jefferson.

The relationship is a slow burn that’s delicious. Lee doesn’t want to admit to herself that she doesn’t see Jeff as just a friend. She’s not sure what to call it, but she knows she’s not content with their being friends. I loved how sweet Jeff was, yet when he showed his cocky side it was perfect. He knows how to push Lee’s buttons and when to do it. He knows when she’s getting too into her head and needs to smile. He’s lovely and I can’t want for more of him.

There’s an aspect of the story that I don’t love, but I respect it and I’m glad Carson included it the way she did. There’s already been some discussion of Native Americans and their treatment in Walk on Earth a Stranger and that goes even further in Like a River Glorious. It’s clear Carson did her research because she depicts, in brutal honestly, the treatment of both Native Americans and the Chinese laborers that helps create California. She doesn’t take it easy or try to avoid making people uncomfortable. She writes this part of history as it was.

The story starts of somewhat slow, but it doesn’t last long. Lee knows her presence places everyone she’s come to care about in danger and that plays a major role in this book. She independent when it comes to taking care of herself, but she’s fiercely loyal and will work and sacrifice herself for the people she cares about.

The conclusion of the novel brings together quite a few loose ends, which makes me happy and yet nervous for what that means Lee will face in the next novel. I’m interested to see what happens with some of the new characters introduced in this novel, as well as how the stories of the other characters evolve.

That I have to wait a year for the conclusion? (I’m not a patient person and this waiting business is difficult, haha) That’s really the only thing I wasn’t a fan of.

Rae Carson fans should read this book and series. Historical fiction fans might like a look into the Gold Rush era with a twist. I also think it’s good for people who enjoy a little fantasy, but don’t want to jump right into an entire fictional world.

Thank you to Edelweiss and Greenwillow Books for an advanced copy of the novel in exchange for an honest review.