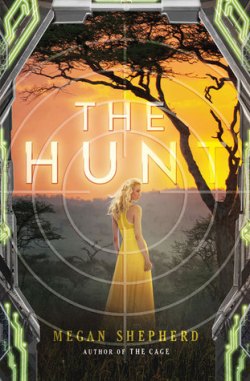 Title: The Hunt
Author: Megan Shepherd
Series: The Cage Series
Publisher: Balzer + Bray
Published: May 24th, 2016
Rating: ★★★★☆ (4 out of 5)The summary of The Hunt form Goodreads:

They’ve left the cage—but they’re not free yet.

After their failed escape attempt, Cora, Lucky, and Mali have been demoted to the lowest level of human captives and placed in a safari-themed environment called the Hunt, along with wild animals and other human outcasts. They must serve new Kindred masters—Cora as a lounge singer, Lucky as an animal wrangler, and Mali as a safari guide—and follow new rules or face dangerous consequences. Meanwhile, Nok and Rolf have been moved into an enormous dollhouse, observed around the clock by Kindred scientists interested in Nok’s pregnancy. And Leon, the only one who successfully escaped, has teamed up with villainous Mosca black-market traders.

The former inhabitants of the Cage are threatened on all fronts—and maybe worst of all, one of the Hunt’s Kindred safari guests begins to play a twisted game of cat and mouse with Cora. Separated and constantly under watch, she and the others must struggle to stay alive, never mind find a way back to each other. When Cassian secretly offers to train Cora to develop her psychic abilities—to prove the worthiness of humanity in a series of tests called the Gauntlet—she’ll have to decide fast if she dares to trust the Kindred who betrayed her, or if she can forge her own way to freedom.

As soon as I finished The Cage, I pushed all other books aside to read The Hunt. I was entirely captivated by the story and I really had to know what happened next. Everything that Cora had trusted in the first book has been thrown away, and the lives of every character have changed drastically. The cliffhanger at the end had me screaming (internally) and cursing time.

I felt entirely connected to every character in the book. After the escape attempt, the six teens are no longer under the influence and controlled conditions of their original cage. Their personalities return, somewhat, to what they were prior to being abducted and messed with. But each carriers a weight about what happened in the cage. They want something different than a life with the aliens because they each realize they are only useful for so long and then they become expendable.

I also liked how it was never clear who could be trusted. I think the fantastic thing about the betrayal at the end of The Cage is that it shakes up the reader as well. Everything feels like it has a layer of distrust covering it. As a reader, I had started to feel as comfortable as Cora in the relationships she was building in the first book. I was entirely shaken and left wondering who could be trusted and who couldn’t. In the end, it became a situational trust. I could see and understand how the characters may not trust others, but they could trust the behavior of others in certain situations.

I felt like Cassian and Cora’s relationship felt less like Stockholm Syndrome and more like an imbalanced relationship that both characters were working on balancing. Cassian still holds the majority of the power, but he’s working with Cora on creating a better balance in their relationship.

We get to see the story from multiple perspectives, which creates a more dynamic world. Each character views their situation in a different way than the others. Cora is determined to get back to Earth and sees her situation as both a barrier and as access to tools to get here there. Lucky sees how humans are not the only ones who suffer for the aliens and wants to do more than just return home. Mali’s understanding of the aliens changes as she discovers more of her humanity. Nok and Rolf are trying to save their baby and raise it themselves, accepting their fate with the Kindred, but wanting more influence over the life of their child. Leon is beginning to understand what it means to be there for others because he wants to be and not out of obligation. He’s learning that a bad past does not make him a bad person unless he lets it.

At times the pacing of the book felt a little slow. It never really pulled me out of the book completely, and it didn’t detract from the book as a whole, but some scenes felt like they were dragging a little bit.

If you read The Cage and enjoyed it, definitely read this one. It has good world-building and the science behind everything is explained well. The ideas behind the different alien races is interesting and the part Cora will play in humanity’s future fits well.