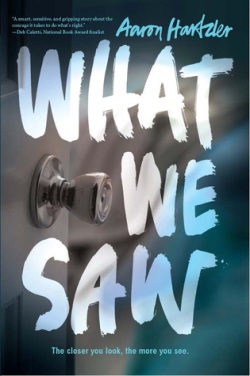 The summary of What We Saw from Goodreads:

Kate Weston can piece together most of the bash at John Doone’s house: shots with Stacey Stallard, Ben Cody taking her keys and getting her home early—the feeling that maybe he’s becoming more than just the guy she’s known since they were kids.

But when a picture of Stacey passed out over Deacon Mills’s shoulder appears online the next morning, Kate suspects she doesn’t have all the details. When Stacey levels charges against four of Kate’s classmates, the whole town erupts into controversy. Facts that can’t be ignored begin to surface, and every answer Kate finds leads back to the same question: Where was Ben when a terrible crime was committed?

This story—inspired by real events—from debut novelist Aaron Hartzler takes an unflinching look at silence as a form of complicity. It’s a book about the high stakes of speaking up, and the razor thin line between guilt and innocence that so often gets blurred, one hundred and forty characters at a time.

It took me several days to piece together my thoughts on this book. I felt punched in the heart when I finished and I couldn’t stop thinking about what happened in the book. It’d be easy to claim that what happened in the book couldn’t really happen in real life. Except it did happen. Does happen. And that made the book more difficult to read. Not because it took the fiction element away from the book, but because the reality of the events in the book couldn’t be ignored. I’m not going to do a Good/Bad review of this book. That would express the reality or the impact this book has.

Everything about this book. Hartzler does not shy away from the truth in this book. Inspired by the Steubenville rape case, What We Saw looks at how society views men, women, rape, and the aftermath.

The Steubenville case was the first case of its kind that I really paid attention to. I found myself frustrated at the coverage, even to the point of yelling at the TV or the online reports I read. The focus on the victim and her character, as though that made anything about the situation okay. The fact that no one seemed to focus on how the future of this victim was affected by the actions of the boys. All the coverage, it seemed, focused on how the boys, the rapists, would be affected. One of the boys is even quoted as saying “My life is over,” as though through no fault of his own, his future was taken away from him.

I rarely read or heard someone speaking the truth. That these boys ruined their own future. They hurt the victim in countless ways. They changed her future without giving a thought to what they were doing. The girl they raped did not ask for this. She did not deserve this. She did not deserve to be torn apart in the court of public opinion. What We Saw captures every aspect of this mentality.

Stacey, the victim, isn’t treated as a victim. She faces victim shaming, in which her behavior and choices are viewed as though she was “asking for it,” or that how she looked and acted meant what was done to her was okay.

The boys she accuses are basketball stars. The town worships the basketball team and, by default, them. No one sees how the boys destroyed Stacey’s life; the town only sees how her accusations and the accompanying charges could destroy the future of the boys.

The school, and especially the basketball coach, work to hide the truth, not wanting to tarnish the boys, the team, or the school. It made me sick to my stomach to read about their actions.

‘Boys will be boys’ is what people say to excuse guys when they do something awful.

Kate knows how the town is reacting isn’t right. She knows it could have just as easily been her instead of Stacey. She was drunk enough to forget a lot of what happened that night. The only difference, in the eyes of everyone around her, is that she didn’t dress or act the same way as Stacey, as though that makes a difference.

Words have meanings. When we call something a theory in science, it means something. Reggie, when you say that you ‘can’t help yourself’ if a girl is wasted, that means something, too. You’re saying that our natural state as men is ‘rapist’.

As I read this book, I felt sick. Every character embodies the ugly, or the good, in cases like this. The fact that, even though this is a work of fiction, every piece of it can easily be found in reality was disturbing and thought-provoking.

This isn’t an easy book to digest. I’m still working on my feelings about it. I’m still thinking about myself and which character I am and want to be. I’m still questioning a society that allows this king of thinking and behavior to happen.

This book will stick with me for a long time. I feel it, resting on my heart and in my mind. It’s impactful and meaningful. This is a book that deserves to be read.

Thank you to Edelweiss and Harper Teen for an advanced copy of the novel in exchange for an honest review.