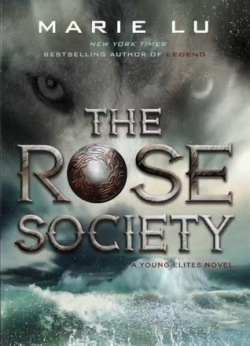 Quick Look: Lu is one author who doesn’t disappoint. The Rose Society was amazing. I absolutely love Adelina’s character development, even though loving it hurts. Really, everything hurts after this book, but it’s wonderful. END_OF_DOCUMENT_TOKEN_TO_BE_REPLACED

Quick Look: This is not the typical book about the development of a hero. This is the story of how a villan came to be and I loved it. END_OF_DOCUMENT_TOKEN_TO_BE_REPLACED 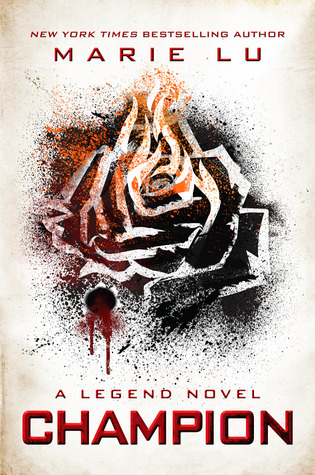 The Legend series is one that kind of came out of nowhere and hit me in the face. I really hadn’t meant to read Legend, but a friend gave me the book and told me I should read it. I trust her judgment, so I picked the book up and read. Thank god I did. Legend hooked me right away, pulled me into the world of June and Day, and made me care. Then Prodigy came out and I had to have it right away. I needed to see what was going to happen next. And then I finished it and thought I would have to wait a year until getting my hands on the final book.

So imagine my surprise and joy when Lu told the world the final chapter in the Legend series would be released in November. I think the smile stayed on my face for a couple days and I had to explain that it was over a book being released earlier than I thought. Only true book lovers understood why that would etch a smile onto my face that wouldn’t leave.

Copied from the Champion book page:

He is a Legend.
She is a Prodigy.
Who will be Champion?

June and Day have sacrificed so much for the people of the Republic—and each other—and now their country is on the brink of a new existence. June is back in the good graces of the Republic, working within the government’s elite circles as Princeps Elect while Day has been assigned a high level military position. But neither could have predicted the circumstances that will reunite them once again. Just when a peace treaty is imminent, a plague outbreak causes panic in the Colonies, and war threatens the Republic’s border cities. This new strain of plague is deadlier than ever, and June is the only one who knows the key to her country’s defense. But saving the lives of thousands will mean asking the one she loves to give up everything he has. With heart-pounding action and suspense, Marie Lu’s bestselling trilogy draws to a stunning conclusion.

Let’s be real, with a description like that, the sooner it can be released, the better. There’s only so much my heart can handle and I am certain Lu is going to push, bend, and break it in all the right ways before hopefully putting it together again. There are so many possibilities within this book that just thinking about what might be coming gets overwhelming.

Champion will be published on November 5th, 2013 by Putnam publishers. Let me know if you’ll be joining me as a midnight reader!

I’ve been getting lucky lately when it comes to reading the middle book in a series. So far, they’ve been avoiding the sophomore slump and have been as good, if not better, than the first novel. Prodigy definitely doesn’t disappoint.

There is no break in the action from Legend. The story starts right away with June and Day trying to find the Patriots. From there, it is non-stop, keep-you-on-the-edge-of-your-seat fantastic. The world Lu has created drew me right in and it felt like I was running right along with them.

June and Day’s relationship has moved quickly. They’ve only known each other for about a month when all of this goes on. That doesn’t bother me though. There is something so perfect about how these characters are written, so amazingly human and real, that everything that happens feels perfect. They have those lusty moments teens are supposed to have, they can be over-thinkers, jealousy is there, they say things without thinking…all of that combines to create two wonderful people in the middle of a sweet romance in the middle of a crazy world.

The twists and turns this novel takes are out of this world. Just when I’d think I’d have something figured out, Lu would throw a new loop in and pull me completely off course. And the ending. Wow. I had been hearing about the gut-punch that was awaiting me at the end of this book and thought I was ready. I had prepared myself for so many different scenarios that when the end actually came and I turned the last page, I was still reeling.

Prodigy is the kind of book that you can’t start and stop. You have to sit down and read it all in one go. It pulls at your heart, hurts you where it counts, and yet you still keep coming back for more. I cannot wait to get my hands on Champion and find out what is in the future for June and Day.

If Prodigy sounds like your kind of book, you can purchase it here:
Amazon
Audible
Barnes and Noble
IndieBound

I’ve had this sitting in my kindle for a while now and I’m not really sure why I kept passing it over. But a couple days ago, I saw it sitting there and I just went for it. I’m incredibly glad I did. Legend was a fantastic novel that had the right mix of action, romance, and explanation of the dystopian future Lu created.

I was so happy to find that both main characters are strong people. They might depend on each other at times, but they can make their own way. They know their strengths and weaknesses and make each situation work as well as it can for them.

I loved June. She could have easily come off as a very cocky individual, but she downplayed her talent just enough to make her lovable. And Day could have easily gone down the same overly cocky path as June, but Lu wrote him with just a touch of that arrogance and it made him perfect. He knew he was good, but he didn’t let that take over. He kept himself in check.

Even the supporting characters are wonderful. I especially love Tess. She found herself in a bad situation and with a little help from Day, managed to make herself into something more than she ever would have been without him.

The love aspect of this story fits amazingly. There’s not too much, but there’s just enough to make you swoon. Any more romance and it wouldn’t have been believable. June and Day don’t have time to fall in love the normal way. They’re under so many pressures and stresses that the way it comes about makes perfect sense.

Legend was a fabulous, amazing read and I can’t wait to read the next part of June and Day’s story. Lu definitely has me hooked.